What The Windsor Spitfires’ Memorial Cup Win Means To Me 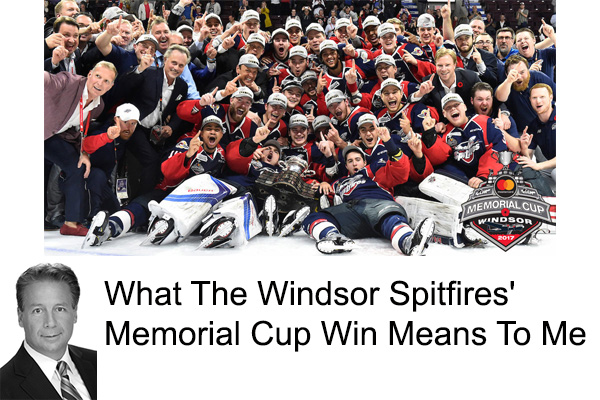 What a week and half it has been in Windsor. I am so proud to be from this area right now and not because of Windsor’s win of the 2017 Memorial Cup, but rather because of the positive face the team organizers and many volunteers put forward to show off Windsor and the great facilities we had to offer.

The team has tried so many years to host the Memorial Cup again, and it’s been 36 years (1981) since the hockey world has had Windsor in the spotlight. Everyone from this area understands the value and benefits that this area brings to the table, but the people who aren’t from here still think that we are a small hick town.

The Memorial Cup was started 99 years ago with the donation of the OHA Memorial Cup in remembrance of the many soldiers who paid the supreme sacrifice for Canada in WW1. The tournament has an amazing presence by our Canadian Forces and it makes me proud to see and support the men and women who serve our great country, Canada.

The tournament itself is a round robin tournament in which the Western and Ontario hockey leagues combine with the Quebec Major Junior Hockey League to play against each other along with the host city team which is the fourth team added. Many people thought that Windsor had no chance because of losing in the first round to London, who lost to the Erie Otters who then became the Ontario champions. Windsor had over 6 weeks of non-game play which allowed them to get some players off injured reserve and to practice hard for the battle ahead.

The Windsor Spitfires won all four of their games to become the 2017 Master Card Memorial Cup Champions on their home ice, which was an amazing treat for the home fans and a great boost for the City of Windsor and surrounding area. It made my experience as a season ticket holder a very fun time watching some great hockey. I was able to take my mother-in-law to the first game of the tournament and will leave us all with great memories for years to come.